Checkout
My Wishlist
Close
Sign in Or Register
Or

Bane Was Born In The Prison

Bane was born in the prison which was located in Middle east. He considered the prison as his home. It was the prison where he learnt about pain and despair. He never saw the light and was known to be born in the darkness.

Bane claims that: Oh, you think darkness is your ally. But you merely adopted the dark; I was born in it, moulded by it. I didn’t see the light until I was already a man, by then it was nothing to me but BLINDING! The shadows betray you, because they belong to me! I will show you where I have made my home while preparing to bring justice. Then I will break you.”

Bane tried to help a female prisoner to run from the prison. He had a good heart. He wanted to care about his well being and let him run away. When it tried to protect her, he was attacked by the other prisons who tortured and beat him. They beat him so hard that his face was damaged. Doctors made attempts to save him. They were unable to save his face. He wore a mask to hide his agony and pain. He was brought back to the prison. After the injury, he wore a mask which helped him get rid of the pain from his injuries.

After escaping the prison, bane was made the league of shadows. His aim was to destroy the city of Gotham and ensure the defeat of batman.

Mens Swedish bomber shearling bane coat was a stylish coat which was worn by Bane. This coat was able to set the standards of fashion conscious men. If you are wondering why to possess Bane leather coat dark knight rises, lets talk about the prominent features of the coat.

Where Can I Get Mens Swedish Bomber Shearling Bane Coat? 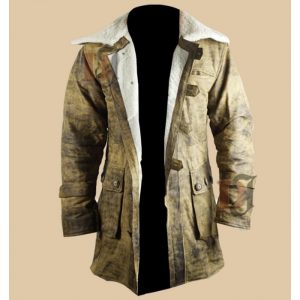 Well, there are several websites on the internet. They offer you the screen accurate replicas of this coat. Amazon is a popular place to obtain this coat. There are a lot of sellers who have written their positive reviews. They also offer you a vast majority of coats. There are different online stores who offer you these coats. These stores offer you Mens Swedish bomber shearling bane coat with all the features it possesses. The coat bane wears in Batman is made from premium quality leather. Mens Swedish
bomber shearling bane coat is offered by different online stores with special attention to detailing.

The coat bane wears in Batman is a must-have wardrobe essential for every stylish man. If you want to possess Bane coat dark knight rises, you can get it from distressed leather jackets. They offer you high-class and top quality leather. You’d be able to make a strong fashion statement wherever you go wearing it. So what are you waiting for?